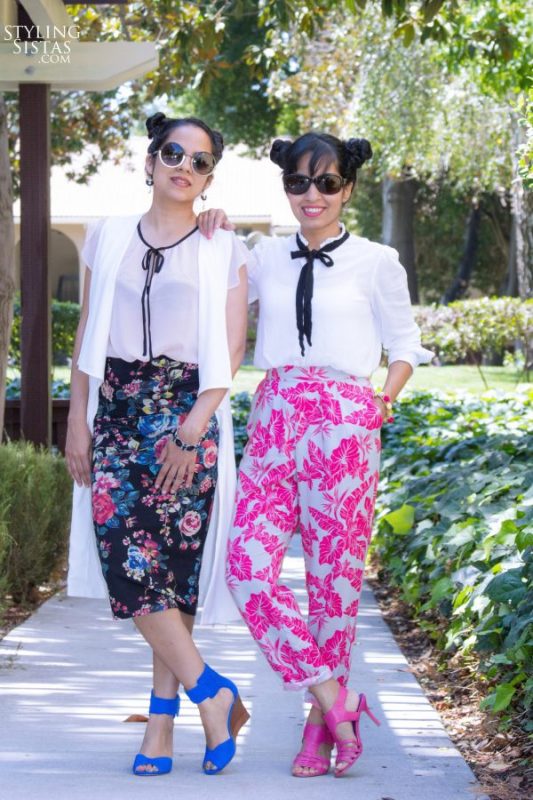 The Styling Sistas duo Amrita & Arpita got together in CA in end of August. To Amrita’s surprise the temperatures had cooled down quiet a bit as compared to NY.
Pre-fall are whimsical times in terms of fashion. It’s nippy in the morning, could get very warm in the midday, and cool and breezy in the evening. Well, it was all that in the SFO bay area for sure. So one needs to wear light and airy for the midday sun and yet be guarded for the sudden chilly drafts.

When sisters get together they come up with fun stuff to do and at times really whimsical ones. This one afternoon Amrita thought of giving Manga fashion a shot for pre-fall styling. Arpita jumped on the idea and took the lead to style these looks.

Manga as we know, is a style of comic/anime originating from Japan. But did you know when broken down, what Manga means? Not to worry, Styling Sistas got you covered (yes from Wiki, hehe!). ‘Man’ in Japanese means whimsical (or impromptu) and ‘ga’ means pictures. So Manga depicts the art of story telling with whimsical artistry and imaginations. Started by little known artists in the 17th century in Japan, Manga in modern times became popular during the pre-post US occupation of Japan in WWII and has not lost its appeal till date. Manga characters and stories caters to all ages and aspects of life, from comedy to thrillers and from science fiction to erotica.

The female Manga dolls & characters are very peculiar and easily recognizable. With big eyes and girlish looks, they beam high school girl kind of innocence and rebelliousness juxtaposed together. The outfits usually have many fusion elements of traditional Japanese style of long layers of flowing fabric and western structured skimpy garments. They are also eye catching because of unexpected way of mixing-matching of patterns and bright colors.

Amrita and Arpita didn’t go all out with the styling though! The inspiration is obvious but it is very wearable. Try your hand on this style inspiration or consult with us for a little help. The hair and makeup is as important as the outfit. Both chose to do high double buns and the upper eyelid make up prominent. Onlookers may take a second look but because the overall look is just like a whiff of Manga it’s comically trendy!