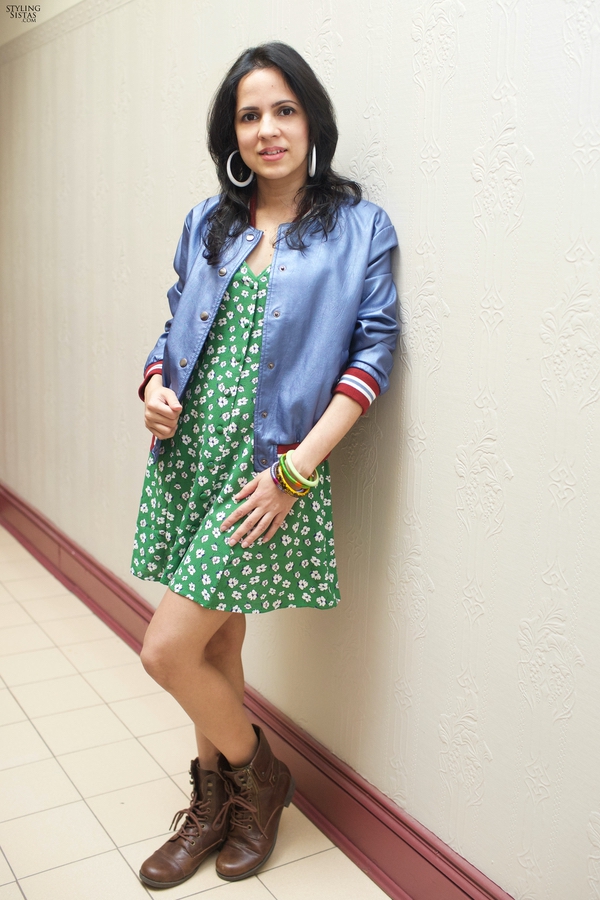 This look has been inspired by the recent NY Fashion Week Fall/Winter 2017.

Many collections that walked down the ramp during the NY Fashion Week clearly gestured to an overwhelming inspiration from the 1980s. The hoop earrings, bright colors juxtaposed in one look, and of course the power shoulders were strutted prominently by powerful looking models. Amri took a few cues and put this look together, which is cute and yet edgy at the same time. Wouldn’t y’all agree?!

Amrita received this pretty printed skater dress as a birthday gift from her junior. The skater dresses and usually made of light fabric cut in fit and flare shape. This style of dresses were inspired by a figure skaters’ dress. In 1956 figure skater Tenley Albright won her Olympic medal after she performed in a pretty pink dress. She was the first American to win the title in a skating dress with no collar. Thus the name for this dress that resemble the skaters’ dress silhouette.

The bomber jacket, was preceded by and looked very similar to the letterman jacket (aka varsity jacket). Both originated in the US, former for aviators in the military and the latter at Harvard University. Amrita is bit confused as to if this particular jacket is a bomber or a varsity jacket. Although there are no giant letters on this one, the stripes on the neckline and wrists do indicate this could be a varsity jacket. What do you guys think?

The combat boots have had many rebirths in the militaries around the world, but probably its current utility and style emanates from the Dr. Martens boots, made first in the UK in the 1960s. The bomber jacket and combat boots have transitioned into the mainstream Western fashion from the US and European military uniforms. The military boots inspired styles gradually entered the non-combat streets in the 1970s and have become staples in any fashionista’s shoedrobe. The gay communities, feminists, left-leaning artists and anarchists re-appropriated both the trends from the dreadful neo-Nazis in Europe and the US, around 1970s, and commandingly incorporated it into their symbolic anti-establishment statement looks.

These three items, bomber jacket, varsity jacket, and combat boots are genderless, sturdy, practical, and can be styled with many different items, thereby are versatile, a stylist’s favorite word! No wonder then that, their appeal runs strong and have been trending for long. More recently, Kanye West, brought back the bomber jacket in a big way with the launch of his clothing line Yeezy. Since we mentioned the hubby, let’s mention wifey, Kim Kardashian, when she tastefully dressed up her varsity jacket.

Read more on the history of the incredible bomber jacket here, here, and here. You may also be interested in the journey of the combat boots into our shoe racks, if so then click here and here. And if you care to know about the origins of the all American varsity jacket, then click here.

Another trend Amri wanted to try out, for a long time, has been the socks with heels. One of the famous Gianni Versace ad with the 1980s supermodels was stuck in our heads for years.

And then Kendell Jenner’s, one of her many notable fashion moments was at the Cannes red carpet last year, when she sported sheer nude socks with dainty open toe heels….that looked oh so chic! So don’t be surprised if Styling Sistas tap on this trend a few more times in the near future.

What is Amrita wearing: