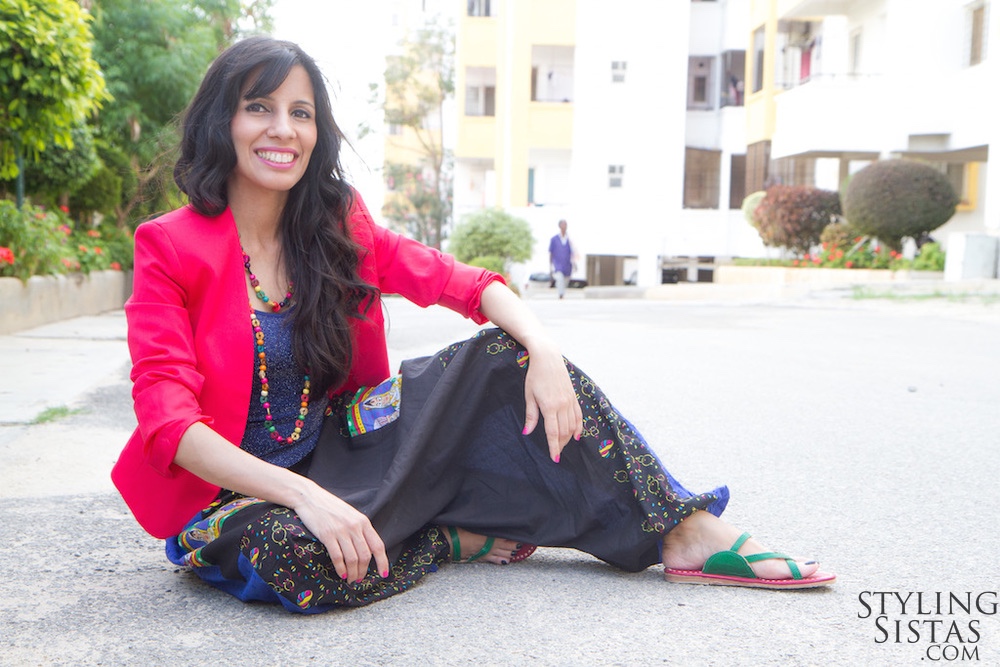 Ana adds some western flavor with the red blazer to this ethnic inspired ensemble. The fitted blazer accentuates shape of the upper body when paired with the loose harem pants and gives the needed warmth as it cools down in the evening. The sparkly cami has a fun peek-a-boo effect. Ana has kept the accessories to a minimum to not overdo the ensemble. And the green toe ring leather sandals keep the look casual for a stroll in an upscale mall or dinner at a restaurant.

A short history of harem pants –
Harem pants have an interesting origin. ‘Harem’ is a word with Arabic roots. As per the recorded history of western fashion, a French couturier Paul Poiret was the first to get inspired by a specific style of pants or trousers, then called ‘style sultane’, worn by many women in the Arab countries, and designed the harem pants for the Parisian women in 1911. In the Indian subcontinent because of the Mughals’ reign such trousers were worn by the muslim women for centuries too and readily evident in Mughal era paintings. When Poiret unleashed his harem pants, Western society had not warmed up to the idea of pants for women yet. The names ‘harem’ and ‘sultane’ did not help the matter much either and Poiret’s collection became instantly scandalous. As with the ebbs in fashion the Harem style pants were made popular again by M.C Hammer in modern times and were also called Hammer pants to his credit. Today the harem style has been adopted by many designers and has inspired even knitwear and worn by both men and women across the globe. In India the salwar (the loose pants of the salwar-kurta pair), especially the Patiala style can be traced back to the Harem pants of Mughal times. (Source: Wikipedia)